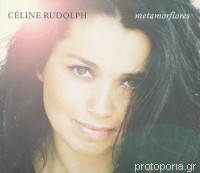 A professor for jazz singing in Dresden (Germany), Celine Rudolph is a master of moods: She knows how to play with the poetry of the moment, work on sound like a painter or sculptor, sing in various (also fictitious) languages and improvise on grooves and feelings. "She uses her voice like a very, very worthy instrument," German daily Frankfurter Allgemeine read. "This voice seems to exist without a body, hovering over wooden colors and sounds and sometimes settling down on them. Then it reminds of precious dishes on a table covered for a love meal." Actualite Culturelle (Madagascar) adds: "Celine Rudolph sings the way people are in love or in sadness. While being perfectly precise, she breathes passion, humour and life into everything."

Inspired by Gilberto Gils album "Oslodum", Celine Rudolph contacted legendary Brazilian producer Rodolfo Stroeter some years ago. Stroeter has not only collaborated with the likes of Joyce, Caetano Veloso, Nana Vasconcelos, Milton Nascimento and Gilberto Gil but is also open to jazz and improvisation. He liked Celines sound and energy immediately, and together they worked on a Brazilian-inspired album that was going to be just "simple and beautiful". The result was "Brazaventure", recorded in Sao Paulo and released in 2007. German trumpet star Till Bronner calls it “a sensationally beautiful album, poetic and full of rich grooves. Outstandingly well produced! Celine Rudolph’s voice has a bewitching and seducing power. Beware: It’s addictive!”

Since the release of “Brazaventure” Celine has performed with Pau Brasil in Sao Paulo and also started her project “Lisboa-Maputo-Berlin” with concerts in Portugal, Mozambique and Germany. "My music refers to different cultures,” says Celine, “French chanson, American and European jazz, Brazilian music, West and South African music, European chamber music and pop.” This universal style shows in her new album called “Metamorflores” which is an artificial word made up of metamorphosis (transformation), amor (love) and flores (flowers). Beside five new songs of her own, Celine presents also melodies by well-known Brazilian artists (Gilberto Gil, Baden Powell, Lenine) as well as two Beatles songs - and she makes all of them dance to her soft rhythms and sounds. Says Celine: “Metamorflores stands for easiness in life” – and also in her music, one may add. Highlighting Toninho Ferragutti’s wonderful accordion and Nana Vasconcelos’ art of percussion, Celine’s weightless songs hover and float between continents. This is what singer Bobby McFerrin said to her: “You are really fun!”