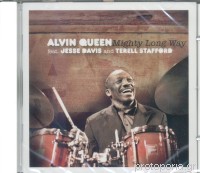 Alvin Queen’s first musical experience was at the First Church of God in Christ where he began singing in the choir and playing the tambourine. And every Saturday Alvin’s father would take the boy to a Harlem barbershop for a haircut and afterwards to a show at the Apollo Theater. By the time he was 15 Alvin could be found playing in jam sessions in Manhattan nightclubs and became a regular part of the jazz scene. During his 35 years’ musical journey, he has played with many legendary artists: Dizzy Gillespie, Dexter Gordon, Johnny Griffin, Milt Jackson, Pharoah Sanders, Stanley Turrentine, Randy Weston, Wynton and Branford Marsalis – and the list goes on. When he joined the Horace Silver Quintet and later the George Benson Quartet in the late 60s, his skill as accomplished artist in his own right was recognized and his respect within the jazz community grew. In 1971 Alvin left Benson and toured Europe with trumpeter Charles Tolliver – his first trip to Europe – and he now lives permanently in Geneva, Switzerland.

The new recording with his all-star quintet (plus guests), “Mighty Long Way”, is very personal; it is Alvin’s expression of his historical musical roots. The tracks “Mighty Long Way” and “Let Us Go Into The House” by gospel great Joe Pace reflect the influence gospel music had on modern jazz in general and Alvin Queen in particular. “Sushi” and “Backyard Blues” by Oscar Peterson are the tracks on which the late pianist would feature Alvin and appreciated the drive and swing he added to the performance. Until Peterson’s recent death Alvin toured the world with him. Likewise, Alvin spent many years with another jazz great, Horace Silver, who influenced him on how to escort all solo musicians and to put the fire under them to move their contribution to a higher level. One of Silver’s compositions is featured on this recording: “Cape Verdean Blues.” During one of Alvin’s visits to the Apollo Theater in Harlem to see the great organist Jimmy Smith, “I Got A Woman,” the popular Ray Charles tune, was performed. The back beat of this composition is the same one you would hear during church services every Sunday. Jesse Davis, the New Orleans-born saxophonist in Alvin’s quintet, contributed two compositions he wrote especially for Alvin: the blues-based “Blues On Q” and “Alba.” Lastly, the tune “Drum Thing” is a drum conversation between Neil Clark and Alvin, a recreation of the popular drum conversations between Art Blakey and Babatunde Olatunji that were presented at the Apollo Theater.

The album “Mighty Long Way” recreates the spirit and atmosphere of hard bop and Hammond-driven soul jazz rooted in gospel and blues. There was no need to improve or modernize the music – the music as presented in its true form speaks for itself. (From the album liner notes by Dr. Thomas J. Hopkins.)