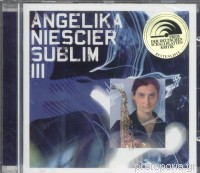 Polish-German saxophone wonder Angelika Niescier is among those exceptional women that for some time now have been vitalizing and inspiring the European jazz scene with new outlines. While an ambitious musician with boundless energy, a luscious tone and virtuosic technique, she also is a composer for theatre, ballet and orchestra, devoted herself to jazz projects for children and toured many countries in Europe, Central and Eastern Asia. Angelika has received scholarships and awards such as North Rhine-Westphalia’s “Prize for Young Artists” (2003) and was the very first “Improviser in Residence” at legendary Moers Festival (2008).

"I’m affected by Coltrane", Angelika says with a slightly coquetry tone. But she is not one more of those hundreds of living musical heirs of John Coltrane. In her compositions and improvisations she rather mingles the most diverse influences of 50 years of jazz history with a very European awareness of form and thus achieves something innovative and unique. Complex staccato themes reconcile with insisting minimal art or erupt to unstoppable vitality and free collectiveness. Wildly twirling frets enlace phrases that resemble Balkan folklore. Abstraction and melodic loveliness find their suitable places. Music magazine Fono Forum read: “In her playing the late Coltrane’s intense force of expression is mixed with the intellectual control of – let’s say – Steve Coleman.”

Founded in 2000, Angelika’s quartet SUBLIM shows a creative potential that seems to be unlimited. Their previous CDs were hailed as “extraordinary” (Jazzthetik, 2002) and “the best German jazz recording since 10 years” (Jazz thing, 2005). Her first-class musicians play with the same energy as their leader and take her refined music across borders into new adventures. With their versatility and zest for playing, SUBLIM have established a musical world of their own in which jazz stars Daniel Humair and Charlie Mariano hear "the future of music“. On their new album, the band welcomes Florian Weber (Trio Minsarah) as their new pianist as well as guest musician Mehdi Haddab on oud (of DuOud fame) who adds interesting new colors and vibrations to Angelika’s “Oud Suite”.