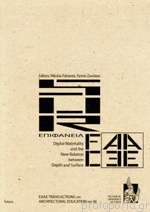 The European Association for Architectural Education (EAAE-AEEA) Subnetwork on Architectural Theory, gathered in Chania Crete in the summer of 2010, in order to focus on the collateral relations between digital/material and depth/surface. In that seminal meeting, titled "SURFACE/ΕΠΙΦΑΝΕΙΑ: Digital Materiality and the New Relation between Depth and Surface as a Challenge for Architectural Education," the invited group was asked to capitalise the findings of four previous work sessions held in Hasselt, Trondheim, Lisbon and Fribourg by applying methods and concepts as interpretive critical tools regarding the emergent digital architecture, its nature and effects in research, education and practice.
Following the SURFACE/ΠΕΡΙΕΧΟΜΕΝΑ events, the present book contains the revised views of the participants, as their contributions were written specifically for this volume. The books theme acknowledges that there has been an important break in the polarity between depth and surface caused in contemporary architecture by the rise of a new digital materiality and tactility. Following a couple of decades of experimentation and a wide spectrum of enchanting applications of the digital, we have well reached the point we can no more either ignore and condemn it, or just celebrate and faithfully apply it. In a broader sense, this shift towards the surface of things as "the deepest side of the world" has to do with a wider socio-cultural change, which has been triggered by postmodern irony and the wish to revalorise all values.
The attempt was seen as an opportunity to revisit a field which, so far, had often been seen as something extraneous and contradictory, if not even hostile, to the origins and the traditions of architecture; an attitude the group willed to also problematise and situate it within its relative context. The two key-texts are unlocking the field by emphasising at either the anthropological-sociological or the technical-ethical challenges underlying the overall re-organisation of architectural merits. The five ensuing parts are organised thematically in a way covering historical, epistemological, technical, conceptual-perceptual and natural properties of the issue respectively.