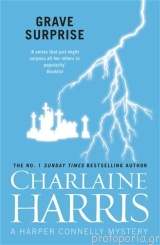 Harper Connelly: a gutsy heroine who makes her living finding the dead - telepathically!

A bolt of lightning struck Harper Connelly when she was 15, leaving her with a strange spider web of red on her torso and right leg, episodes of weakness, shakes and headaches - and an ability to find dead people.

Harper is summoned to Memphis to demonstrate her unique talent, but there are still plenty of sceptics, even as Harper stands atop a grave and announces there are two bodies buried there. The police are convinced theres something fishy going on when the grave is opened to reveal the centuries-dead remains of a man, which theyd expected (that being his grave, after all) and a dead girl, which no one expected - except Harper, of course. And suspicions are raised even further because Harper had failed to find eleven-year-old Tabitha Morgenstern when she was abducted two years before.

Harper and Tolliver need to find the real killer to prove Harpers innocence, especially after their nocturnal visit to the cemetery in hopes that Harper can sense something more is followed by the discovery, the following morning, of a third dead body in the grave...