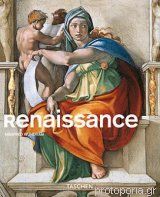 The rebirth of culture

Art as we know it today could not exist had not the revolutionary work of the Renaissance artists paved the way. Widely considered the most important and influential movement in the history of fine arts, literature, architecture, and science, the Renaissance marked the emergence of Western civilization from the Middle Ages into the modern era. Beginning in the 14th century in Italy, the movement spread throughout Europe by the late 15th century, the main centers of fine art activity being in Florence, the Low Countries, and Germany. For the first time, art became intellectual; influenced by humanism, artists experimented with secular subjects and revived classical antiquity. Advances in anatomy and geometry produced more realistic depictions in terms of space and perspective for the Italians, while new oil painting techniques made their mark in Flemish painting and woodcuts and engravings were the specialties of the Germans.

TASCHENs Basic Art movement and genre series:
each book includes a detailed introduction with approximately 35 photographs, plus a timeline of the most important events (political, cultural, scientific, etc.) that took place during the time period. The body of the book contains a selection of the most important works of the epoch; each is presented on a 2-page spread with a full-page image and, on the facing page, a description/interpretation of the work, a reference work, portrait of the artist, quotes, and biographical information.

The author: Manfred Wundram received his doctorate in 1952 with a thesis on Lorenzo Ghiberti. From 1970 to 1989, he was professor of art history at Bochum University. His numerous publications on Renaissance art include a book on Palladio published by TASCHEN.