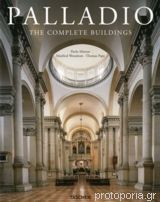 No other architect in the history of Western art has had an influence so spontaneous and yet so enduring as Andrea Palladio. Palladianism broke through all cultural stylistic barriers. It spread not only throughout the Neo-Latin nations but held Germany, the Netherlands, Scandinavia and the countries of Eastern Europe in its sway and formed the lineaments of English architecture of the 17th and 18th centuries. Palladio lived in an age which was extremely exciting for the historical development of architecture and his work was an important factor in the evolution from Renaissance to Baroque. This volume offers a thorough introduction to the architecture of Palladio and includes all works which researchers have attributed to him.

Paolo Marton trained as a bookseller. He has devoted himself to photography since 1977 and has a number of successful publications to his name, including a book of photographs of Rome and the villas of Veneto. Marton works for a number of magazines, and several public exhibitions of his photographs have been held.

Thomas Pape was born in Dortmund in 1963. He studied art history, history and German literature and philology at the Ruhr-University of Bochum.

Manfred Wundram studied art history, archaeology, music history, and German literature. He taught art history at Ruhr University in Bochum for many years and has published widely on Early and High Renaissance.