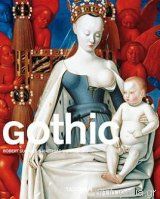 Mysticism of the Middle Ages

The earliest Gothic art dates back to mid-12th century France, from which it spread throughout Western Europe through the 15th century. The Gothic style, which dominated the European aesthetic for four centuries, was prominent both in architecture, especially cathedrals and churches, and the arts—painting, sculpture, stained glass, illuminated manuscripts, and frescoes. Predominantly religious, Gothic art was dark and emotional, marked by intensity and logical formalism. The later Gothic period, known as the International Style, was a precursor to the Renaissance.

TASCHENs Basic Art movement and genre series:
each book includes a detailed introduction with approximately 35 photographs, plus a timeline of the most important events (political, cultural, scientific, etc.) that took place during the time period. The body of the book contains a selection of the most important works of the epoch; each is presented on a 2-page spread with a full-page image and, on the facing page, a description/interpretation of the work, a reference work, portrait of the artist, quotes, and biographical information.

The authors: Robert Suckale studied in Berlin, Bonn, Paris and Munich. He has published numerous works on European art and architecture between 1100 and 1530. Matthias Weniger studied art history in Berlin, Barcelona, and Bonn. Since 1997 he has been on the staff of the Staatliche Museen – Preussischer Kulturbesitz in Berlin.