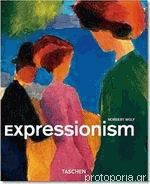 Each book in TASCHENs Basic Art movement and genre series includes a detailed introduction with approximately 30 photographs, plus a timeline of the most important events (political, cultural, scientific, sporting, etc.) that took place during the time period. The body of the book contains 35 of the most important works of the epoch; each is presented on a 2-page spread with a full page image and, on the facing page, a description/interpretation of the work, portrait of the artist, and biographical information.

During the first two decades of the 20th century, many artists famously experimented with nonrepresentational expression. Taking cues from ideas hinted as by artists such as El Greco, Goya, Van Gogh, and Munch, Expressionists sought to transform reality rather than depict it in any sort of literal fashion. Egon Schiele, Max Beckmann, Paul Klee, and Wassily Kandinsky are among Expressionism’s most famous exponents.

Norbert Wolf (*1949) studied art history, linguistics, and medieval studies at the universities of Regensburg and Munich. He received his doctorate in art history in 1983. He has held visiting professorships in Marburg, Frankfurt, Leipzig, Dusseldorf, and Nuremberg-Erlangen, and is currently visiting professor at the University of Innsbruck. Other TASCHEN titles by Wolf include Diego Velazquez (1999), Codices illustres (in collaboration with Ingo F. Walther, 2001), Ernst Ludwig Kirchner (2003), and Caspar David Friedrich (2003).