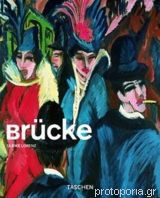 Color and clash: the height of German expressionism

The "Brucke" (established in Dresden in 1905) is, together with the Blauer Reiter in Munich, the most important movement in German expressionism. Meaning “bridge” in German, “Brucke” refers to Nietzsche’s belief that humanity has the potential to make a bridge to a perfect future; more concretely, the movement formed a bridge between neo-romantic and expressionist painting. This book covers the work of founding members Ernst Ludwig Kirchner, Erich Heckel, Karl Schmidt-Rottluff, and Fritz Bleyl, as well as works by their friends, such as Emil Nolde and Otto Mueller. Divided into four main categories (self-portraits and portraits of friends, nudes in the studio and in nature, men in the cities, and war and apocalyptic themes) this volume provides a stimulating overview of the movement.

Ulrike Lorenz studied art history and archeology at the University of Leipzig. She received her doctorate from the Bauhaus-University in Weimar. From 1992 to 2004 she was chief director of the Kunstsammlung Gera, and since 2004 she has held the same position at the Museum Ostdeutsche Galerie Regensburg. She has also participated in many expositions and publications about modern art and architecture.