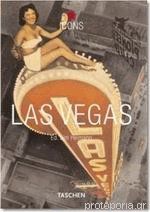 In the space of a century, Las Vegas went from a dusty frontier town to the booming 24-hour mecca for pleasure-seekers captured in this new TASCHEN title. America’s naughtiest town is seen in vintage pictures and ephemera that chronicle all the hot spots from the Sands and the Strip to the Golden Horseshoe and Glitter Gulch, along with a historical overview of the city’s multiple reinventions. From the era of Bugsy Siegel to Frank Sinatra’s Rat Pack and Elvis’s triumphant return to the stage, there’s no gambling with this book—it’s a sure jackpot.

W.R. Wilkerson III is a freelance journalist, songwriter, author of The Man Who Invented Las Vegas (Ciro’s Books, 2000), and co-author of TASCHEN’s All-American Ads of the 40s. His writing has appeared in the Los Angeles Times, The Hollywood Reporter, and USA Today, among others. Wilkerson currently resides in Southern California with his son.