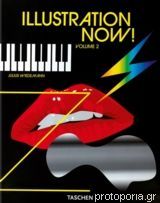 Following the success of Illustration Now!, this installment presents a completely new selection of 150 illustrators from all around the world. Whereas the first volume brought together a fascinating mix of star illustrators and brand new faces that together formed the face of illustration around the world, Illustration Now! 2 is even more exciting, featuring illustrators from 25 countries, with styles ranging from cutting edge to traditional. Also included is a dialog between design specialist Steven Heller and German illustrator Christoph Niemann about illustration’s role in the world today. This book is perfect not only for creative professionals and illustration students, but also artists and anyone with an appreciation for visual language.