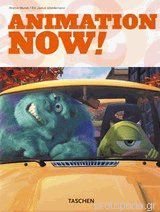 "For the person who gets a kick out of movies such as Shrek 2 and Finding Nemo, consider Animation Now!, a survey of 80 of the great cartoonists and animation studios worldwide, from Hollywoods Pixar, Walt Disney, and DreamWorks SKG, to decidedly higher-brow practitioners such as South African artist William Kentridge." - Business Week, New York

Just how do they do it? The artists behind the cartoons are the focus of this sweeping study that brings you everything you ever wanted to know about today`s best animation specialists. We`ve rounded up about 80 of the world`s most prominent artists/studios and arranged them from A to Z, including examples and descriptions of their work as well as biographies, filmographies, bibliographies, lists of awards received, and contact information. Profiles of the world`s best animation schools are also provided.

The authors: Aida Queiroz, Cesar Coelho, Lea Zagury, and Marcos Magalhaes are the creators of "Anima Mundi", the Brazilian-based annual animation festival that draws more than 80,000 visitors every year from around the world.

Julius Wiedemann was born and raised in Brazil. After studying graphic design and marketing, he moved to Japan, where he worked in Tokyo as art editor for digital and design magazines. Since joining TASCHEN in Cologne, he has been building up TASCHEN’s digital and media collection with titles such as Animation Now!, Web Design: Best Studios, and TASCHEN’s 1000 Favorite Websites..