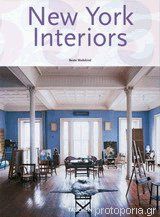 Its a classic thing weve all heard: "New York is great to visit, but I wouldn`t want to live there." New Yorkers laugh it off because they know the secret: its even better when you live there. New York Interiors offers readers the chance to see the Big Apple`s most fabulous pads in all their eccentric splendor. The Hells Angel who sleeps next to a coffin, the painter who makes art from trash, the woman whos brought Provence to Downtown, the couple who live in the Brooklyn of the 19th century— "typical" New Yorkers` homes are presented alongside those of its glitterati (such as Leo Castelli, Wolfgang Joop, Isabella Rossellini and Steven Spielberg). With beautiful photographs of over 40 homes in and around New York City, this book is bound to convince the nay-sayers that New York really is the place to be—and live.

"These are well-heeled folk, and the inherent elegance and grandeur of the city is revealed in these striking interiors. What would it be like to be a wealthy New Yorker? This book gives you a sneak peek into a rarefied world."

Beate Wedekind is a journalist and former editor-in-chief of Elle, Elle Decoration, Ambiente and Bunte. She has hosted numerous chat shows on German television. She now leads a nomadic professional life, working for international advertising agencies and also administering the Golden Camera film and TV award.

Angelika Taschen studied art history and German literature in Heidelberg, gaining her doctorate in 1986. Working for TASCHEN since 1987, she has published many titles on architecture, photography, design, contemporary art, interiors, and travel.