The garden of love and its delights. Rediscovery of a lost book from the age of the Baroque
Έκπτωση
10% 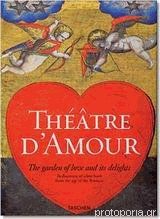 The gift of love

Publication, or collecting and binding, of love emblems was a novel and popular pastime in the Netherlands in the early 17th century, and the particular album reproduced here is an outstanding example. Meticulously colored and heightened with gold and silver, these prints surely won the heart of their lucky receiver. Though the album’s exact provenance is unknown (due to the removal of the original insignia by a later owner), the outstanding quality, coloring, and extensive use of gold and silver suggests that it was produced for a rich, cultivated, and probably infatuated client. Since use of color was rare and albums were often one of a kind, it is likely that this copy is completely unique; its 143 folios are all reproduced here in their original size (25.3 x 18.5 cm), complete with an introduction and accompanying descriptions by author Carsten-Peter Warncke.

What would the original owner have said if he or she knew the album would end up, 400 years later, warming the hearts of so many?

Carsten-Peter Warncke studied art history, classical archaeology, and literature in Vienna, Heidelberg, and Hamburg, and received his doctorate from the latter in 1975. He is professor of art history at the University of Gottingen.