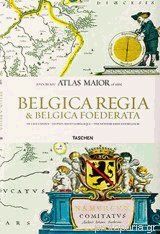 This volume includes all 63 maps of Belgium and The Netherlands and the text is in Dutch, French, and English.