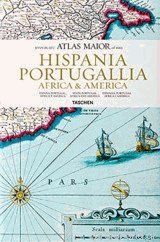 This volume features all 28 maps of Spain and Portugal, 13 maps of Africa and 23 maps of America and the text is in Spanish, English, and Portuguese.