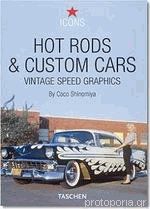 Hep and hopped up

Ford’s original Model T was the first car to undergo “speed modification”, a hobby that quickly grew into a $60-million aftermarket industry. Steadily picking up speed ever since, the practice of engine and body customization has become one of America’s favorite rites of passage. Hitting its stride in the 1950s, the underground hot rod culture spawned the likes of Rat Fink, Von Dutch, and George Barris—the King of Kustoms—while also inspiring a generation of rebels without a cause. Culled from the garages and toolboxes of hot rod enthusiasts, this essential collection of rare photos and ephemera is an essential for anyone who dreams of putting the pedal to the metal.

Coco Shinomiya is a Los-Angeles based freelance art director and graphic designer. Also known as Monster X, she has received numerous awards including two Grammy nominations for album packaging. She shares her home with a guinea pig named Roscoe and two hot rods -- a 32 Ford Tudor Sedan and a 27 T Roadster project. She enjoys going fast.

After working as the editor of Custom Car magazine, Tony Thacker edited and published more than 50 automotive and motorcycle books for Osprey Publishing. He is currently the vice president of marketing at the SO-CAL Speed Shop in California and has written more than a dozen books.