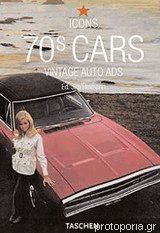 Cars in the Age of Aquarius

During a decade of tumultuous change that gave us disco and optional 8-track tape decks, the seventies would also witness the demise of muscle cars and the birth of the economy car. And with an influx of imports from Europe and Japan there was more choice than ever. 70s Cars has them all—from luxury models like the Cadillac Eldorado convertable, Chysler Cordoba (with rich Corinthian leather!), and a “smaller” Lincoln Versailles, to fuel-conscious subcompacts like the Pinto, Vega, “Le Car,” and the Datsun 210. Also featured in this collection of over 175 auto advertisements are the AMC Gremlin, Ford Futura, Oldsmobile Cutlass, Plymouth Volare, Subaru (“not a Japanese Beetle”), and Volkswagen Rabbit.