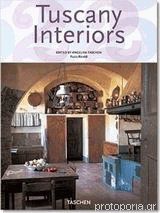 The land of lust and legend

Nestling in the gentle hills and brushed with the hazy sfumato of the air, the homes of Tuscany have long been the objects of lust and legend. This book affords a privileged glimpse of Tuscan houses and interiors. Leading lights of the international arts and fashion scenes open their doors and bid us enter. The range extends from the simple casa colonia, the typical farmhouse of Chianti, via the majestic palazzo of the Puccis and the magnificent villa of the Siemens family to a house designed by Ettore Sottsass.

Paolo Rinaldi studied classics and later worked as a journalist for Casa Vogue. Since 1995, he has been a freelance writer and travel journalist, contributing to various newspapers and magazines. His numerous publications include volumes on the Venetian Friuli region, Tunisia, and Vietnam.