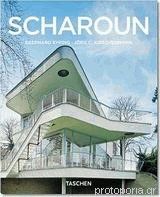 German architect Hans Scharoun (1893-1972) studied and practiced architecture his entire adult life but did not build a major building until 1963 when his impressive Berlin Philharmonie finally came to life. The fact that he stayed in Germany during the Second World War prevented him from realizing grandiose projects and caused him to concentrate more on interiors than exteriors for many years. Nevertheless, Scharoun’s sculptural designs, influenced by the expressionist-utopian circle “Glaserne Kette” of which he was a member, did not go unnoticed and were among the best of his generation.

Eberhard Syring received his PhD in architectural studies at the University of the Arts in Bremen, Germany, where he currently teaches the theory and history of architecture. He is the scientific director at the Bremer Zentrum fur Baukultur (b.zb).