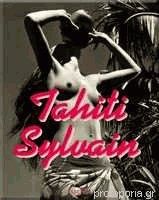 Text and photographs by Adolphe Sylvain

When photographer Gian Paolo Barbieri arrived in Pepeete in search of a photographer by the name of Sylvain, whose work he had admired on some old, faded postcards, he was told that Sylvain was dead and his archives destroyed by fire. Barbieri had all but given up his quest to find Sylvain when by chance he came across the late photographers wife, Jeanine Tehani. She was the island beauty who had mesmerized the young Sylvain back in 1946; one look into her eyes and he married her and stayed there for the rest of his life. Since Sylvains death in 1991 she had been dreaming that a European would embark on the island and discover his life’s work. Barbieri (born, in an amazing twist of fate, on the same day and hour as Sylvain) fulfilled her dream by bringing Sylvains photographs -some of which, though damaged, had survived the fire in 1969- back to Germany to be published. The result is this book full of the best images culled from Sylvains archives, including dreamy portraits of Tahitis lovely, mystical women, heartbreakingly beautiful landscapes and photos of celebrities, such as Brigitte Bardot and Charles de Gaulle, who visited the island. Tahiti Sylvain is a wonderful tribute to Sylvains passionate work and to a bygone era of idyllic Tahitian life.


Adolphe Sylvain (1920-1991) stopped off in Tahiti in 1946 and immediately fell in love. He spent the rest of his life on the island, working as a photo correspondent for magazines such as Paris Match, Life, and National Geographic and filming a series of documentaries about Polynesian culture and environment.

Born in 1921 in Bordeaux. A writer and journalist, he worked for Le Monde, Le Nouvel Observateur and for television. He is the author, among other things, of biographies of Andre Malraux, Leon Blum, Francois Mauriac, Charles de Gaulle and Francois Mitterrand.

Born in Milan in 1938, he made a name for himself in the 1960s with fashion photographs for clients such as Vogue Italia. In 1978 the German news magazine Stern ranked him as one of the 14 best fashion photographers. His works have been shown in art galleries all over the world. TASCHEN has already published three volumes of his photography, Madagascar, Tahiti Tattoos and Equator.