The Earthquakes of Cyprus 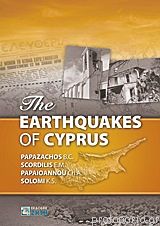 The main goal of the present book is to give scientific information on the earthquakes of Cyprus. This information concerns: basic seismological knowledge, active tectonics in the easternmost part of Mediterranean where Cyprus is located, the space and time distribution of earthquakes in this area, the level of seismic activity there, the assessment of seismic hazard in Cyprus and the history of the strongest earthquakes which occurred in or close to the island. This information is described in the five chapters of the book. At the end of each chapter, the relative references (bibliography) are cited.
The first chapter is an Introduction that includes general seismological knowledge which is needed for the reader to get broader seismological knowledge and understand the following four chapters of the book. Its last section deals briefly with the history of the seismological knowledge in Cyprus.
The second chapter deals with active tectonics in Cyprus and surrounding area, which gives the geological and geophysical environment where earthquakes are generated there.
The third chapter concerns the seismicity of Cyprus and surrounding area, that is, the distribution in space, time and magnitude of earthquakes in the area of Cyprus.
The fourth chapter deals with the seismic hazard in Cyprus, that is, with the effects of strong seismic motion on the technical structures (buildings, etc.), which is of interest for engineers and important from social point of view.
In the fifth chapter of the book, the macroseismic effects (on technical structures, ground, water, etc.) of each of the known strong earthquakes which were strongly felt in Cyprus since antiquity are described.
We thank professors D. Mountrakis, G. Karakaisis and C. Papazachos for reading critically important parts of this book.We also thank Dr. S. Pilidou (Geological Survey Cyprus), Dr. K. Kyrou and F. Kyprianou (Water Development Cyprus) for information and data of the strong motion instruments in Cyprus. We appreciate the technical support (typing, etc.) of D. Vlachou and E. Konstantinidou.
The maps of the book have been created using the the GMT freely distributed software (Wessel and Smith, 1995).
We are much obliged to ZITI Publications for their excellent work.