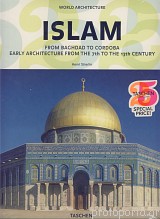 Hardcover, 24 x 30 cm (9.4 x 11.8 in.)
The products of a highly-developed architectural style even today bear witness to the greatness of Arabic culture

To the western eye, cities such as Jerusalem, Mecca, Baghdad or Cairo can seem utterly alien. It is not only the way of life that is unfamiliar, it is also the astoundingly varied architecture.

This volume surveys more than six centuries of Islamic architecture, from the late 7th century to the mid-13th, placing mosques, Koran schools and palaces in their cultural, religious and political contexts. Distinctive features are its view of building as reflection of Moslem thinking, and its focus on the Arab world.

With more than 200 colour photographs, numerous plans, chronological tables and an extensive glossary, this is a reference work which appeals to the expert and the travel-hungry reader alike.