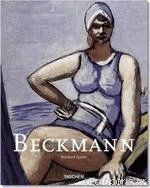 Max Beckmann (1884-1950) found his central theme in the loneliness of twentieth-century man, threatened by catastrophe and torn between materialism and freedom of mind and spirit. His early pictures showed the influence of Impressionism, with a preponderance of biblical, historical, and allegorical themes. The first world war made a deep impression on him: somewhere between Expressionism and Neue Sachlichkeit (New Objectivity), the succinct forms and hard contours in his memorable paintings and graphic works showed man at the limit of physical and mental endurance. Later, the harshness and severity of his style softened and his colours became more radiant, but the monumentality remained. Theatre, circus, and music hall became parables of human existence.

Beckmanns work is concerned with the fundamental conditions of human existence and the tragic entanglement of the human being dependant on the whims of gods, sexuality, and society. His relentless search for knowledge, his uncompromising commitment to the picture, and his belief in the power of its form and color give his work its distinctive, fascinating character, and have earned him a high-ranking place among the artists of the twentieth century.