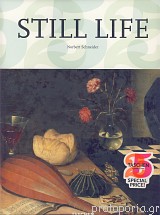 
How do the objects in a still life reflect the customs, ideas and aspirations of the time? This is one of the questions which Norbert Schneider asks in this book. The period between the late Middle Ages and the 17th century was without doubt the heyday of the still life. It is an art form which gives us valuable insights into changes of mentality and philosophy as well as peoples notions of death. Still lifes chart the history of scientific discoveries and their acceptance as well as the gradual replacement of the mediaeval concept of the world.

Norbert Schneider is Professor of Art History at the University of Karlsruhe, Germany. He has written books on the art of the Middle Ages, the early modern era and the 19th century as well as on aesthetics and methods in art history.