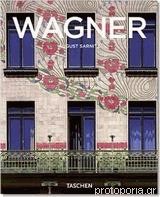 The pioneer of Viennese Modernism

One of Austria’s most influential architects, Otto Wagner (1841-1918) played a key role in modernizing urban architecture. Forming an approach described as structural rationalism, Wagner pioneered use of materials such as glass, steel, and especially aluminum. He was associated with the Viennese Succession, a group of artists and designers headed by Gustav Klimt that initiated a departure from the conservative style of the Viennese Kunstlerhaus. Among Wagner’s most important buildings are the Vienna Postsparkassenamt (Postal Savings building) and the Steinhof Church.

The author: August Sarnitz is an architect and professor of architectural history and theory at the Vienna Academy of Fine Arts. He has published on the subject of 20th century architecture and exile-architecture in the United States and New Zealand, including books on Rudolf M. Schindler, Lois Welzenbacher, Ernst Lichtblau, Ernst Plischke, and Adolf Loos.