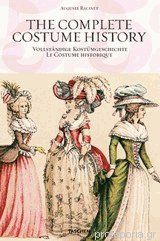 From togas to tailcoats: the evolution of style from antiquity to 1888 (TASCHENs 25th anniversary - Special edition)

Originally published in France between 1876 and 1888, Auguste Racinet’s Le Costume historique was the most wide-ranging and intelligent study of clothing ever published. Covering the world history of costume, dress, and style from antiquity through the end of the 19th century, the great work—“consolidated”in 1888 into 6 volumes containing nearly 500 plates — remains, to this day, completely unique in its scope and detail.

Racinet’s organization by culture and subject has been preserved in TASCHEN’s magnificent and complete reprint, as have excerpts from his delightful descriptions and often witty comments. Perusing these beautifully detailed and exquisitely colored illustrations, you’ll discover everything from the garb of ancient Etruscans to traditional Eskimo attire to 19th century French women’s couture.

Though Racinet’s study spans the globe from ancient times through his own, his focus is on European clothing from the Middle Ages to the 1880s and this subject is treated with exceeding passion and attention to detail. The Complete Costume History is an absolutely invaluable reference for students, designers, artists, illustrators, and historians; it is also an immensely fascinating and inspirational book for anyone with an interest in clothing and style.

Introduction by Francoise Tetart-Vittu, head of the graphic arts department at the Musee de la Mode et du Costume de la Ville de Paris. She studied art history at the Sorbonne and she specializes in the costume history of the 18th and 19th centuries. The author of many books on costume history and curator of exhibits, she lives and works in Paris.