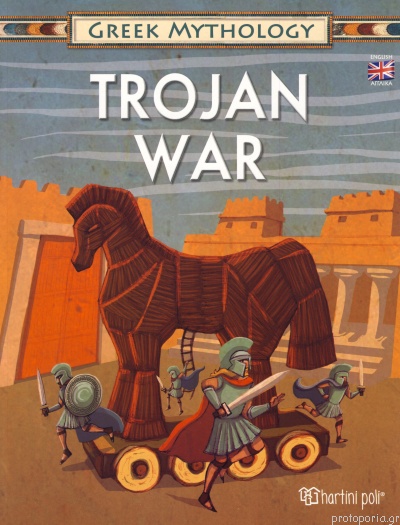 All the heroes and gods of Greek Mythology appear a collection of wonderfully illustrated books filled with games, activities and historical information that help you explore and understand the ancient Greek world.

The Trojan War, the most famous of all, broke out when Paris, the son of the king of Troy, ran off with Helen, the most beautiful woman in the world and queen of Sparta.
Her husband, Menelaus, together with his brother, Agamemnon, the king of Mycenae, summoned the most powerful rulers of Greece to help them. They formed a great army and sailed with approximately one thousand ships to Troy. They besieged the city for ten years with no success. Several heroes fought and were killed in the battlefield, such as Achilles, the bravest of all the Greeks, and Hector, the leader of the Trojan army. It was only when the ingenious, king of Ithaca, Ulysses, devised the Trojan Horse, a massive wooden horse, that the walls of Troy opened...

Homer, the greatest poet of antiquity, recounted, in his own unique way, the achievements and passions of the heroes in the last year of the war in his epic called ILIAD.