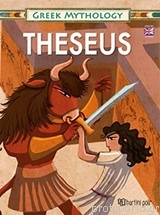 All the heroes and gods of Greek Mythology appear in a collection of wonderfully illistrated books filled with games act;ivities and historical information that help you explore and understand the ancient greek world.

Theseus was one of the greatest mythical heroes of antiquity. At a young age he set out from his grandfathers palace in Troezen for the kingdom of his father, Aegeus in Athens. Along the way he faced many dangers, lurking bandits and terrifying man-eating beasts. He used his bravery and brilliance and dedeated all obstacles.
Theseus later confronted a major challenge. In the dark labyrinth of Crete he met the Minotaur, a half-man monster that every year devoured young boys and girls from Athens. Theseus traveled to a kingdom of Minos and fought with the Minotaur.