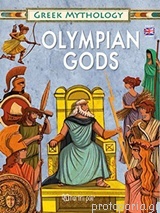 All the heroes and gods of Greek Mythology appear in a collection of wonderfully illustrated books filled with games, activities and historical information that help you explore and understand the ancient Greek world.

Ancient Greeks believed in twelve gods, six men and six women, who resided on Mount Olympus, the highest mountain in Greece. From there, under the kingship of mighty Zeus, they ruled the whole world and decided the fate of humans. Hera, Poseidon, Athena, Apollo, Aphrodite, Artemis, Ares, Demeter, Hephaestus, Hermes and Hestia had their own abilities and merits and exercised their individual powers on the elements, the land and the sea The Olympian Gods were immortal and fed on nectar and ambrosia Either as allies or foes, they often visited Earth to help or punish humans. There are numerous myths about them and their adventures are unbelievable and amazing!