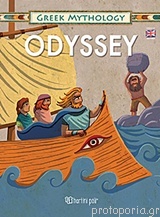 All the heroes and gods of Greek Mythology appear jn a collection of wonderfully illustrated books filled with games, activities and historical information that help you explore and understand the ancient Greek world.

The Trojan War, the most dreadful war of antiquity, lasted ten years. It finally came to an end thanks to Ulysses, the ingenious king of Ithaca, and his plan, the Trojan Horse, which led the Greeks inside the walls of Troy and gave them the victory.
However, the journey back home is not easy for Ulysses and his companions. Poseidon, the god of the sea, is enraged at him and does not intend to let him return to Ithaca. For ten years Ulysses fights against the wild waves and wanders in distant and unknown lands. That period is full of adventures and sufferings for him. He encounters formidable monsters, giants, witches and unsolvable mysteries. When he finally manages to return to his dearest island, new adventures and dangers are waiting for him...

The travels and adventures of Ulysses were described by Homer, the greatest poet of antiquity, in his epic called ODYSSEY.