A History of Advertising 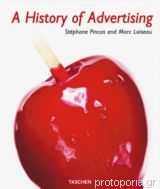 The evolution of the ad

The history of western advertising is a long one, starting as early as the 1630s, when Frenchman Theophraste Renaudot placed the first advertising notes in La Gazette de France, or in 1786, when William Tayler began to offer his services as "Agent to the Country’s Printers, Booksellers, etc.," but the first time that the term "advertising agency" was used dates back to 1842, when Volney B. Palmer created his agency in Philadelphia, Pennsylvania. Widely considered to represent the birth of modern advertising, this date marks the beginning of a creative industry that has transformed many commercial works into cultural icons.

Divided into sections by decades, this book explores the legendary campaigns and brands of advertising’s modern history, with specific anecdotes and comments on the importance of every campaign. You will find the picture of the camel that originated the Camel pack, the first Coca Cola ad, and even how artworks by masters such as Picasso and Magritte have been used in advertising.

Stephane Pincas and Marc Loiseau are advertising veterans from Paris, having worked over three decades in top creative departments and on social research respectively. During their long period in the industry, mostly at the fourth largest communication group Publicis, they have helped to build some legendary French brands nationally and internationally. Their in-depth knowledge of the field and their personal adventures are reflected in this publication.