Assassinations That Shook the World: From Julius Caesar to JFK 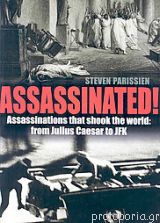 The killing of holders of high office for a predetermined political or ideological purpose is a practice as old as power politics itself. Assassins tells the darkly sensational story of twenty centuries of political murder, from the Roman era to the present. It includes accounts More...of many of the most infamous assassinations in history, from the slaying of Julius Caesar in 44 BC to the shooting of President Kennedy in 1963. Drawing on the latest research, Dr Steven Parissien presents a richly entertaining sequence of case-studies of this, the ultimate method of regime change. Each elegantly written essay includes not only a gripping account of the assassination, its political context and consequences, but also a biographical profile of both the slayer and the slain. Assassins runs the full gamut of murderous methods and motivations - from multiple stabbing to suicide bombing to aerial attack, from dynastic overthrow to religious fanaticism to the propaganda of the deed. Sometimes shocking, but always involving and informative, it offers a dramatic and distinctive perspective on more than two millennia of world history.
Συγγραφέας:
Parissien, Steven
Εκδότης:
Quercus Publishing
Σελίδες:
208
ISBN:
9781847241900
Ημερομηνία Έκδοσης:
1/7/2008