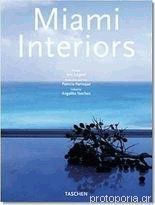 Urban paradise: pads to die for

What city made Don Johnson a Ferrari-driving pastel-suit-wearing international icon, is playground for the America’s retired upper crust, birthplace of the plastic-pink-flamingo-in-the-front-yard phenomenon, and home to America’s biggest Cuban population? You don’t have to be a genius to figure out that Miami is the singular town in question. Fun, happy, and sexy homes populate this dreamy seaside city where blue sky, green palm leaves, and electric vibes provide an exotic backdrop to the fabulous and outrageous interiors we’ve selected for you. Among the gems we’ve mined for this new addition to our Interiors collection are locations used in the television series “Flipper” and “Miami Vice,” a house on stilts suspended over the crystal clear ocean water, a high-rise apartment with jaw-dropping views, the Art Deco fabulousness of Morris Lapidus’s Eden Roc hotel, and a Cuban woman’s modest home bursting with kitschy religious paraphernalia. Whether they’re exploding with color and pizzazz or imploding with white minimalism, these are the creme de la creme of Miami pads.

Iranian-German writer Patricia Parinejad studied French, Spanish, and English literature before working in styling and production of interior design and architectural projects and magazines. Parinejad, who lives and works in Los Angeles, Paris, and New York, most recently worked on the TASCHEN title Berlin Interiors.