A Seismic history of Crete

The Hellenic arc and trench
Έκπτωση
35% 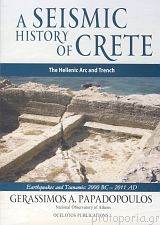 The book introduces the geodynamics and seismicity of the HA-T region, the Minoan archaeology of Crete going back to the 2nd millennium BP as well as an analysis of the main documentary sources used and the methodology followed to calculate historical earthquake parameters. Then, a number of 219 earthquake events occurring from the antiquity up to 2011 are described with the support of documentary sources, in original and in English translation, and of instrumental records. Field geological and archaeological observations as well as pictorial material supplement the documentation. Earthquake focal parameters are evaluated and reliability scales are introduced. Associated phenomena, such as tsunamis, volcanic eruptions, seaquakes, liquefaction in soil, rockfalls and landslides, earthquake precursors and the similar are also discussed. Each one of the main historical periods of Crete, from the Minoan era up to the modern one, are examined separately.
Cultural items, such as folk songs, poems etc., when related to the earthquake activity are also inserted as a supplement to the rest material of documentation.