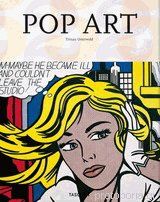 "Everything is beautiful," raved Andy Warhol, in raptures at the glamour of modern life, consumer society, and the world of the media and its stars; his proclamation can be considered the maxim of the pop generation, which included artists Jasper Johns, Roy Lichtenstein, Claes Oldenberg, Robert Rauschenberg, James Rosenquist, Tom Wesselmann, and Richard Hamilton, among others.

The pop artists of the 1960s had a profound effect on the cloth of art history and their influence can be clearly seen in art today. Here, Tilman Osterwald explores the styles, themes, and sources of pop art around the world.

Tilman Osterwold studied art history, archaeology, philosophy, and psychology, obtaining his PhD in art history in 1969. After teaching at university for many years, he was director of the Wurttembergischer Kunstverein from 1973 to 1993. He has organized numerous exhibitions and published widely on the subject of 20th century art and culture.