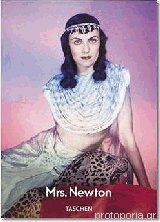 June Newton, renowned under her photographic pseudonym Alice Springs, takes the reader on an extraordinary journey from her childhood in Australia, via work and travels with her husband, Helmut Newton, to life today in LA and Monaco.

The photographs by and of Springs featured throughout the book—a wonderful contemporary mix of personal snapshots and professional portraits of creative figures including Yves Saint Laurent, Gore Vidal, Balthus, Robert Mapplethorpe, Brassai, Nicole Kidman, and Angelica Houston—illustrate the story of her life, in which the houses and apartments where she has lived stand as milestones. Her previously unpublished diary extracts and her new writing are lit up by gentle irony, disarming honesty, and a photographers eye for telling detail.Intensely personal and engaging, this book charts the journey through life of a remarkable 20th century woman.

June Browne was born in Melbourne, Australia, in 1923. As a young woman she was passionately interested in the theatre. She changed her name to June Brunell for there was another Melbourne actress called June Brown. She received the Erik Kuttner award for best actress in theatre in 1956. She married the photographer Helmut Newton in Melbourne in 1948 and became a photographer herself in 1970 in Paris, changing her name once again to Alice Springs. She has had numerous exhibitions and books published. Springs has lived in London and Paris and for the last twenty years has lived in Monte Carlo with her husband. She travels extensively and her interests range widely.