A gun for Hire 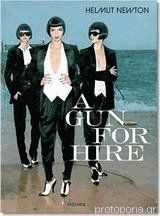 The fashion photography of Helmut Newton

Helmut Newton once said, “Some people’s photography is an art. Mine is not. If they happen to be exhibited in a gallery or a museum, that’s fine. But that’s not why I do them. I’m a gun for hire.” (Newsweek, 02/02/04) This prosaic proclamation from one of the 20th century’s most celebrated photographers is not a little shocking, but nonetheless firmly positions Newton as the no-frills image-maker that he was. His work is so powerful, so striking, that it defies categorization. In refusing to call his work “art,” Newton leaves us free to do so, and judging from the amount of museum and gallery shows that have featured his work, it is clear that the option has been widely exercised. This book brings together a selection of Newton’s fashion catalog work from as early as 1962 through 2003 and his last editorial photographs for US and Italian Vogue—all work he made as a “gun for hire.”

The photographer: Helmut Newton (1920-2004) was one of the most influential fashion photographers of all time. Born in Berlin, he arrived in Australia in 1940 and married June Brunell (a.k.a. Alice Springs) eight years later. He achieved international fame in the 1970’s while working principally for French Vogue, and over the next three decades his celebrity and influence continued to grow. Eschewing studios for the most part, Newton preferred to shoot in the streets or in interiors. His mixture of controversial scenarios, bold lighting, and striking compositions came to form his signature look. In 1990 he was awarded the “Grand Prix National” for photography; in 1992 was awarded by the German government “Das Grosse Verdienstkreuz” for his services to German culture and was appointed “Officer des Arts, Lettres et Sciences” by S.A.S. Princess Caroline of Monaco. In 1996, he was appointed “Commandeur de l’Ordre des Arts et des Lettres” by Philippe Douste-Blazy, the French Minister of Culture. Working and living in close companionship with his wife until his death at 83, through his last click of the shutter he continued to be as distinctive and influential as ever.