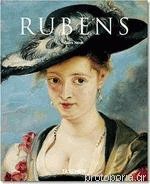 Renowned among his contemporaries as one of the foremost painters of his era, Flemish baroque artist Peter Paul Rubens (1577-1640) practically revolutionized northern European art.

A shrewd businessman, international ambassador, passionate scholar, devout Catholic, and loving family man, Rubens—fluent in six languages, no less—cared about nothing more than painting, and thus devoted his life to it. Combining typical Flemish realism with classical themes influenced by the Renaissance, Rubens caught the attention of all of Europe and helped put his native Antwerp on the map. His very profitable workshop of accomplished artists, one of whom was Van Dyck, completed over 2000 works under his supervision.

Gilles Neret is an art historian, journalist, writer, and museum correspondent. He has organized several art retrospectives in Japan and founded the SEIBU museum and the Wildenstein Gallery in Tokyo. He has directed art reviews such as L’Oeil and Connaisance des Arts and received the Elie Faure Prize in 1981 for his publications. He is the editor of TASCHENS catalogues raisonnes of the works of Monet and Velazquez, as well as the author of Dali Painted Works and Erotica Universalis.