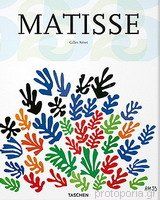 An indispensable work of reference about this lodestar of modern art

The extraordinary significance of the painter and sculptor Henri Matisse in the history of modern art, but also his influence, was no less decisive than that of his main rival, PabloPicasso. In fact, Matisse’s stylistic liberation actually goes one step further in the pursuit of his own personal goal — the perfect synthesis of line and color — by which he sought revolutionary approaches to the great tradition of French painting by drawing upon its classical aspects. For those who wish to know more about this lodestar of modern art and follow the adventurous path of his creative career, this publication is surely the most comprehensive and informative source available. Lavishly illustrated, its authoritative commentaries trace the artist’s search for balance, purityand serenity, from the chromatic brilliance of his Fauve period, through his travels, the Orient, geometric synthesis (it was he who introduced Picasso to African art by givinghim his first mask), and the odalisques to the final triumph when, at the age of eighty, he invented his gouache cut-outs that culminated in his illustrations for Jazz and allowed him to achieve his goal of sculpting in paint just as a sculptor works in stone. Matisse is widely acknowledged as an artist whose canvases are extremely difficult to reproduce in print. With this in mind, each work presented here has been painstakingly compared with the respective original, in close collaboration with the artist’s grandson, Claude Duthuit. The bard of color deserves no less.

The author: Gilles Neret (1933–2005) was an art historian, journalist, writer, and museum correspondent. He organizedseveral art retrospectives in Japan and founded the SEIBU museum and the Wildenstein Gallery in Tokyo. He edited art reviews such as L’?il and Connaissance des Arts and received the Elie Faure Prize in 1981 for his publications. Neret is the editor of TASCHEN’s catalogues raisonnes of the works of Monet and Velazquez,as well as the author of Dali – The Paintings and Erotica Universalis.