The Prince of Romanticism
Έκπτωση
10% 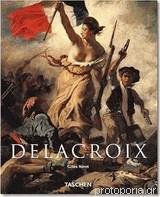 At Delacroix studio sale, held six months after his death in 1864, crowds and critics were astonished at both the abundance and the multi-disciplinary nature of the work on display, the lifes vision of a man praised by Baudelaire for being the last great artist of the Renaissance period and the first of the Modern.

But Delacroix himself was well aware of the position he wanted to occupy. Taking his cue from Rubens in both lifestyle and visual inventiveness, he took the order of classical composition and allied it to a universally appreciated symbolic and allegorical intent, producing from that marriage works of unmatched integrity and sensuality. From the spectacular Salon reception in 1824 to a work such as the major Scenes from the Chios Massacre (when the term Romantique was first applied to his style) through to the liberating and controversial carnality of The Agony in the Garden, Delacroix genius in graphic design, in the liberation and reinvention of colour, and in the portrayal of bodies was never in doubt.

Delacroix numerous sketchbooks attest to a personality committed to the most truthful results, in both his Goyaesque fantasias of horror, cruelty and sacrifice and in his huge historical canvases. Excessive, monumental, Byronic even, this Victor Hugo of the art world has proved profoundly influential, his technique studied by movements as diverse as Impressionism, Expressionism and the Abstract painters of mid-century. Leaving the self-indulgence of the Romantics far behind, the nobility of Delacroix spirit will continue to speak to any and every age.