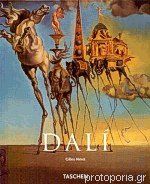 
Picasso called Dali "an outboard motor thats always running." Dali thought himself a genius with a right to indulge in whatever lunacy popped into his head. Painter, sculptor, writer and film maker, Salvador Dali (1904 - 1989) was one of the centurys greatest exhibitionists and eccentrics - and was rewarded with fierce controversy wherever he went. He was one of the first to apply the insights of Sigmund Freud and psychoanalysis to the art of painting. He brought extraordinary sensitivity, imagination and concern for precision to bear upon submerged levels of consciousness. This lively biography presents the infamous Surrealist in full colour and in his own words. His provocative ideas are all here, from the soft watches to the notorious burning giraffe. And the fantastic phenomenon that was Salvador Dali is grasped entire and placed in his various contexts.

Gilles Neret, born in 1933, is an art historian, journalist and writer. He has organized several retrospectives in Japan, including a Dali exhibition in 1964. He was awarded the Elie Faure prize in 1981 for his series "A lecole des grands peintres". He is the editor of "catalogues raisonne" of the works of Monet and Velazquez.