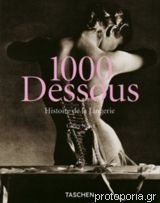 "This book is just what Ive been looking for all my life and will accompany me to my desert island." - Fetish Times, United Kingdom

Women have always known how to stimulate the latent fetishism of the men around them. Under her dress, a Greek girl of the classical period would wear a belt around her hips which was of no practical use except to draw attention to her feminity. Likewise, the women of Rome already wore garters round their thighs, though the stocking had not yet been invented. In our own century, vamps, starlets, pin-ups and models have filled our cinema screens, our advertising hoardings, our office calendars and our imaginations with the erotic engineering of the garter belt and the surreptitious rustle of nylon stockings.

About the editor and author:

Gilles Neret (1933-2005) was an art historian, journalist, writer, and museum correspondent. He organized several art retrospectives in Japan and founded the SEIBU museum and the Wildenstein Gallery in Tokyo. He directed art reviews such as LOeil and Connaissance des Arts and received the Elie Faure Prize in 1981 for his publications. Nerets many titles for TASCHEN include Salvador Dali - The Paintings, Matisse, and Erotica Universalis.