Movies of the 20s 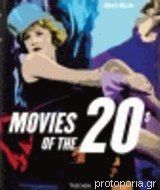 The birth of cinema: From the invention of the moving picture to the first sound movies


From the first moving pictures (the Lumiere brothers 1895 Larrive dun train), early westerns, fantastic pictures, and nickelodeons all the way through the golden age of silent film in the 1920s, this book covers the first three decades of the moving picture around the world.


In America, we witness the birth of Hollywood, circa 1910, where film quickly became a powerful industry and D. W. Griffith put American cinema on the map; later, Charlie Chaplin and Buster Keaton developed a new language of visual comedy while eccentrics like Erich von Stroheim and Cecil B. DeMille turned cinema into a high art form and show biz respectively, and sex symbols like Rudolph Valentino and Greta Garbo heated up the screens.


Meanwhile, in Europe, German directors such as Ernst Lubitsch and Fritz Lang were establishing their careers and Russian greats Eisenstein and Pudovkin were already revolutionizing a nascent art form. At the end of the 1920s the very first "talkies," albeit rudimentary ones, brutally crushed the silent art, but by 1930 sound masterpieces such as Sternbergs The Blue Angel and Milestones All Quiet on the Western Front were produced. This exploration of the founding years of cinema offers a fascinating perspective on a period in movie history that is far too often overlooked in our times.

About the editor:
Jurgen Muller studied art history in Bochum, Paris, Pisa, and Amsterdam. He has worked as an art critic, a curator of numerous exhibitions, a visiting professor at various universities, and has published books and numerous articles on cinema and art history. Currently he holds the chair for art history at the University of Dresden, where he lives. Muller is the series editor for TASCHENs Movies decade titles.