Movies of the 50s 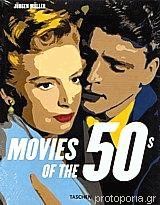 A decade of contrasts

At a time when people were terrified of UFOs and Communism, the movie industry was busy producing movies that ranged from film noir to suspense to grandiose musicals; apparently the paranoid public in the 1950s craved family entertainment and dark, brooding pictures in equal doses. The result is a decade’s worth of truly monumental cinema, from Hitchcock masterpieces (Vertigo, Psycho, Rear Window) to comedy classics (Tati’s Mr. Hulot’s Holiday, Billy Wilder’s Some Like it Hot) to groundbreaking nouvelle vague films (Godard’s Breathless, Truffaut’s The Four Hundred Blows) and profound, innovative dramas such as Antonioni’s L’Avventura, Fellini’s La Strada, John Huston’s Misfits, and Kubrick’s Paths of Glory. Though censorship kept sex safely off-screen, sexy stars such as James Dean, Marlon Brando, and Marilyn Monroe provided plenty of heat in Rebel Without a Cause, A Streetcar Named Desire, and Gentlemen Prefer Blondes respectively. This survey of the most important films of the 1950s covers all the wholesome, subversive, artistic, thrilling, and mysterious trends in cinema worldwide.

The editor: Jurgen Muller studied art history in Bochum, Paris, Pisa, and Amsterdam. He has worked as an art critic, a curator of numerous exhibitions, a visiting professor at various universities, and has published books and numerous articles on cinema and art history. Currently he holds the chair for art history at the University of Dresden, where he lives. Muller is the editor of TASCHENs Movies decade series.