Movies of the 40s 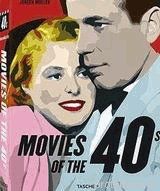 A trendsetting decade in world cinema

The 40s were the decade of the movies. With the world at war, directors served up propaganda and escapist entertainment to the massed moviegoers of the pre-television age. Yet in many countries, there was also a parallel tendency towards greater realism. In Italy, for example, the spirit of the resistance culminated in the neorealist movement, which inspired the world’s moviemakers with masterpieces such as De Sica’s Bicycle Thieves (1948). In Hollywood, the 40s were probably the most creative phase in the studios’ history. Never before had the Dream Factory brought such compellingly edgy and experimental films to the silver screen. The most seminal work of the decade was Citizen Kane (1941); Orson Welles’s extravagantly original debut anticipated the expressive visual style that would come to typify film noir—the genre of “dark movies,” populated by romantic antiheroes and femmes fatales, that still represents the essence of cinema for many passionate movie buffs. In the atmospheric black-and-white universe of noir, Rita Hayworth, Ava Gardner, and Lauren Bacall became timeless erotic icons, while Bogart—following The Big Sleep (1945)—was the very quintessence of cool. While these movies bore witness to the cracks in America’s facade, another genre was busily reconstituting the nation’s identity. In the films of John Ford, the Western came back with a vengeance, Monument Valley embodied America’s incomparable grandeur, and John Wayne (The Duke) was a natural aristocrat of the wild frontier.

The editor: Jurgen Muller studied art history in Bochum, Paris, Pisa, and Amsterdam. He has worked as an art critic, a curator of numerous exhibitions, a visiting professor at various universities, and has published books and numerous articles on cinema and art history. Currently he holds the chair for art history at the University of Dresden, where he lives. Muiler is the series editor for TASCHEN’s Movies decade titles.