Movies of the 30s 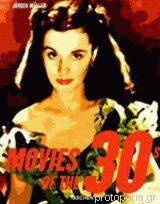 Escaping reality: the wonderful world of cinema during the Great Depression

From Tod Browning’s Dracula (1931) to Charlie Chaplin’s The Great Dictator (1940), this tome explores a diverse and fascinating era in world cinema.

The stock market crash of 1929 had left the America—and the globe—in a devastating depression that would not begin to lift until World War II. With so many jobless, penniless, broken people singing the blues, is it any wonder that Hollywood strove to distract viewers from their misery with comedies like Chaplin’s Modern Times (1936), Capra’s feel-good Mr. Deeds Goes to Town (1936), and the Marx Brothers’ hilarious Duck Soup (1933), thrillers such as Hitchcock’s seminal The 39 Steps (1935) or Hawks’s Scarface (1932), or the epic romantic classic Gone with the Wind (1939)?

While American moviegoers flocked to the theaters to escape their troubles and find solace in the magical world of Hollywood movies, filmmakers in Europe were experimenting with new techniques in a medium that had only recently gained sound; Fritz Lang’s German Expressionist M (1931) and Jean Renoir’s anti-war masterpiece La Grande Illusion (1937) greatly enhanced cinema as an art form, while Leni Riefenstahl’s visually stunning Olympia (1936-38) pushed the limits of the medium’s technical capacities. It’s clear that while the 1930s was a time of poverty and struggle for many people, the world of cinema was much enriched.

The editor: Jurgen Muller studied art history in Bochum, Paris, Pisa, and Amsterdam. He has worked as an art critic, a curator of numerous exhibitions, a visiting professor at various universities, and has published books and numerous articles on cinema and art history. Currently he holds the chair for art history at the University of Dresden, where he lives. Muller is the series editor for TASCHEN’s Movies decade titles.