The Secret of Evil 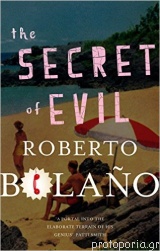 Roberto Bolano confirmed his place as a giant of Latin American literature with his novels The Savage Detectives and 2666. Included in this one-of-a-kind collection is everything he was working on just before his death in 2003. A North American journalist in Paris is woken at 4 a.m. by a mysterious caller with urgent information. For V. S. Naipaul, the prevalence of sodomy in Argentina is a symptom of the nations political ills. Daniela de Montecristo (of Nazi Literature in the Americas and 2666) recounts the loss of her virginity. Arturo Belano - Bolanos alter ego - returns to Mexico City and meets a band called The Asshole of Morelos. Belanos son Geronimo disappears in Berlin during the Days of Chaos in 2005. Memories of a return to the native land. Argentine writers as gangsters. Zombie schlock as allegory . . . Opening The Secret of Evil is like being granted access to the Chilean masters personal files; it offers a final opportunity to read the work of an intense, brilliant and truly original writer.
Συγγραφέας:
Μπολάνιο, Ρομπέρτο
Εκδότης:
B66ks
Σελίδες:
400
ISBN:
9780330510653
Ημερομηνία Έκδοσης:
29/12/2016