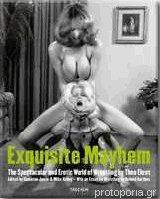 Discover the world of wrestling that was too hot for T.V.! Photographer Theo Ehret’s fabulous archives have been dug up by artists Cameron Jamie and Mike Kelley and brought together for the first time in publication. Not only will you see the most famous wrestlers of the 60s and 70s in action, but you’ll learn all about a sub-genre of pro wrestling known as “apartment wrestling.” Pitting voluptuous bikini-clad women against one another in a staged photography set, apartment wrestling is what many a male fantasy is made of, and there is no better way to appreciate the merits of this unique and rare “sport” than in the classic photographs of Theo Ehret.

With over 400 illustrations, an essay on wrestling by Roland Barthes, biographical photos, and an interview of Ehret, “Exquisite Mayhem” is not just for wrestling fans – its a spectacular adventure into a lesser known side of one of Americas most popular forms of entertainment.

Edited by artists Cameron Jamie and Mike Kelley, Exquisite Mayhem features the best of Ehrets work from the sixties to the eighties, bringing together Ehrets pro wrestling and apartment wrestling images. With over 400 illustrations, an essay on wrestling by Roland Barthes, biographical photos, and an interview with Ehret, Exquisite Mayhem is not just for fans of wrestling - its an adventure into a lesser known side of one of Americas most popular forms of entertainment.

Cameron Jamie (born in Los Angeles in 1969) has exhibited his artwork throughout the U.S. and widely in Europe. His artwork addressing the theme of wrestling has appeared in numerous bodies of work. Jamie is also an expert on the subject of North American professional wrestling and apartment wrestling.

Mike Kelley (born in Detroit in 1954) lives in Los Angeles and is an internationally known artist. He has exhibited widely, including solo museum exhibitions in the United States at the Whitney Museum in New York, Los Angeles County Museum of Art, as well as at the Museu dArt Contemporani de Barcelona and elsewhere.